Nate Marquardt is a Christian that has competed as an athlete in Mixed Martial Arts (MMA) since 1999. He is currently training to compete again. He retired from fighting in the UFC (2004-1017). He wants to use his experience and popularity in MMA for sports ministry and other ministries in order to teach and spread the Gospel of Jesus Christ locally and worldwide. Nate was raised as a Christian but wasn't truly "born again" until 2013, when God lead him through adversity causing him to surrender his life to Jesus.
Nate began his training in the martial arts as a teenager, studying the disciplines of Brazilian Jiu-Jitsu, Kickboxing, and Kenpo under instructor Alastair McNiven. After 3 years he was also training under BJJ expert, Ricardo Murgel, whom he now has a 2nd degree black belt under, and he also started training Freestyle Wrestling. Marquardt has also trained with Sanae Kikuta and the GRABAKA Dojo in Tokyo, Japan, under Shane Pitts who gave Nate a black belt in Japanese Ju-Jitsu, and under Mike VanArsdale at the Olympic Training Center in Colorado Springs, Colorado and many other coaches including Greg Jackson, Firas Zahabi, Trevor Wittman, Loren Landow, Bryan Youngs, Jake Ramos.

Nate first won the Pancrase Middleweight title in 2000. At the time, he was the youngest fighter to ever own the title "King of Pancrase." Marquardt fought in Pancrase until 2005 and won 7 title fights in the process. Nate left Pancrase as the champion to pursue his dream of fighting the best fighters in the world. Nate has aquired wins in the UFC over top fighters such as Wilson Gouveia (KO), Demian Maia (KO), Jeremy Horn (Sub), Dean Lister (Dec), Martin Kampman (KO), Joe Doerkson (Dec), Ivan Salaverry (Dec), Rousimar Palhares (KO), Dan Miller (Dec) and more. Nate signed with Strikeforce in early 2012 and won the Welterweight world title defeating previously undefeated Tyron Woodley by knockout. Marquardt signed back with the UFC at Middleweight in 2014. Since then, he has wins against James Te Huna (Sub), CB Dollaway (KO) and Tamdan McCrory (KO).
Nate went to Gateway Seminary from 2017-2020 and received a Master of Theological Studies (MTS). Now he is working on a Doctorate of Ministry (DMin) and should complete his project by 2023. Nate is doing ministry with Ethne Global Services in places like Myanmar and Turkey. He also started Exodus Global Services after he preached at a crusade in Pakistan in March, 2021. This ministry soon opened two Christian schools to help disciple children in Pakistan and equip them to release them from generational poverty and slavery.
Nate currently trains at Sanford MMA in Deerfield Beach, Florida. He fought for the first time in nearly 4 years on August 6, 2021 in Titan FC where he won by armbar against Michael Cora. Watch the above interview to see what he says about how God called him back to fight. 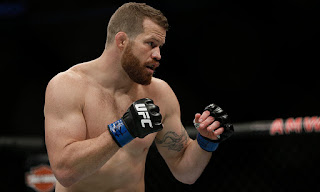